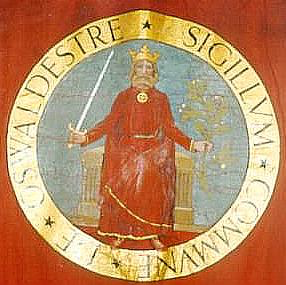 The other day I was working on a broad history of the post-Roman period and I came across Oswald, a king of the Northumbrians during the seventh century.  A little math and I realized he had lived to the ripe old age of fifty-eight.  Keeping in mind the general maximum for the non-religious during the era, he had lived three years beyond what any person could reasonably expect to be.  I was, tongue away from cheek, astonished.

Then again, kings did have certain advantages over commoners.  Certainly they participated in battles and, in an era when a strap of leather tied around the ankles passed for shoes, one bad move could have anyone on their back or limping with a broken ankle.  In the hall no one knew the Heimlich Maneuver, so a loose bone in the throat could kill any person.  With a diet focused on meat, heart disease was an issue as well.  As a person’s bodily secretions were considered holy they never bathed, which made a perfect environment for communicable diseases.

And yet a man like Oswald lived to fifty-eight.  And fought battles.

That might seem a little extreme to us, living as we do in a world where politicians are regularly found to be dishonest and are dispensed with easily, where loyalty is more the office of the gullible than the elite of society it may seem odd to us that warriors would so willingly and so inevitably lay down their lives for their lord.  But it is not unheard of even in this century.  The President of the United States is a man constantly protected by bodyguards.

And the Early Medieval King, of the Irish, Pictish, British, or Germanic peoples, had a much more personal bond to his men than the President has with those who protect him.  Every day for their first few years of service, warriors lived in their king’s hall, partaking of his bounty in the food they ate, the drink they imbibed, even in the women they enjoyed.  The king gave them silver off of his person, weaponry and armor from his personal cache, coins, horses, dogs.  When they had proven their worth they were allowed to live away from the hall in their own homes.  Still, they remained on the king’s land and lived off of his wealth.  For a warrior, everything that he was, that he had enjoyed, that he owned, was due to his king.  He was everything because of his lord, and he must have felt like he would be nothing without him.  No wonder that the war-band was utterly loyal to their king to the death.

No wonder that a man like Oswald could live to the ripe old age of 58.  He wasn’t alone, either.  Even in the first century of British and English kingship (roughly 470 to 670) the occasional individual pops up who managed to live beyond fifty-five, even past sixty on rare occasion.

As you may or may not know, the idea of Indo-European (or Aryan before the Nazis abused the term) arose when someone noticed some strong linguistic similarities between Sanskrit and Latin.  Once the connection was made many European languages and several over the Middle East and into India were similarly connected to a race whose language was the forerunner of them all.

But it also opened up the possibility of other connections for many of the cultures between Ireland and India, among them the original Indo-European religion.  And primary among their pantheon of gods was Dyeus Phter, controller of storms who worked from the mountains.  I don’t want to bore anyone with the subtleties of linguistics (nor am I qualified to get into a lengthy discussion), but the basics are this:  As the core of the Celtic, Nordic, Romance, Greek, Indic, and Persian language groups were developing they made subtle changes to their vocabulary and this translated to the deities they worshipped.  He became Zeus among the Greeks, Thor and Tyr for the Norse, Dies Piter with the Romans, Dyaus Pita for the Indians, and the Illyrians called him Dei Patrous.  The Indo-Iranians, Baltic, Celtic, and Slavic peoples would worhship him as Deva/Daevas, Dievas, Deuos, and Div respectively.

But it’s also clear the nature of the god changed along with his name.  Though he existed among the Indo-Europeans as the father of the gods (“Dyeus” meaning god and “Pater” father) he did not retain that position unilaterally.  Part of the reason for that might have been because of the cultures the Indo-Europeans conquered after they had separated.  Other reasons might have been their new environment or their varied experiences as distinct cultures.  The Norse for instance would retain Thor’s attributes but would soften his personality into the protector of mankind and something of a bumpkin while Odin would become the dominant god.  He seems to have no linguistic relative anywhere, but his name is an indicator of mystical wisdom.

What is clear is that Dyeus Pater began his existence as a storm god.  A culture’s deities tend to reflect the culture they came from which means that the Indo-Europeans of pre-3000 B.C.E. felt very much at the mercy of the elements and hoped that by worshipping the strongest god, the god of lightning, they might give themselves a better chance of survival.  This changed as everyday survival became more certain; the sun would come to symbolize prosperity and health, the sea would remain inconsistent but would gain importance as the Indo-Europeans developed naval trading.  The forge, wine, and war would all come into their own in the following centuries.  The cultures they conquered would additionally give them a mother goddess, fertility, and respect for the moon.  It was with the storm-god, though, that the Indo-Europeans had their core.

In Greek mythology, a young woman named Caenis is raped by one of the gods.  He is so pleased with his conquest that he offers her any prize for the pleasure he has given her.  She asks for two things, to be a man and to be impenetrable.  She lives out the rest of her life as a great warrior named Caeneus.  She is finally killed when her enemies manage to bury her alive.

Throughout Greek, Indian, Norse, and even Celtic (in short Indo-European) mythology and legend women appear occasionally in the role of warriors.  Inevitably, these women lose some aspect of their womanhood in the process.  They can never be with a man and retain their warrior abilities.  The valkyrie Brunhild does so and becomes nothing more than a very small woman bent on getting revenge on the men who have deceived her.  Atalanta marries but loses all of the speed that had made her an Olympic athlete in the bargain.

This rule seems to be an arbitrary one.  For instance, it doesn’t apply to queens.  Boudicea was long renowned as one of the great British chieftains because of her significance in the revolt against Britain.  Amazons were immune, too.

But in both cases, there are loopholes.  Boudicea married a consort, a man of lesser status and the Amazons didn’t marry men, they had sex with them.  There was no relationship and therefore no loss of their power.  The one Amazon queen known to have married, Antiope, immediately lost her warrior abilities when she submitted to Theseus’ authority.

It is an old myth, that somehow a woman loses her independence and ability to fight once she has submitted to marriage.  It is a belief supported in the myths, too.  That doesn’t make it any less foolish.  Perhaps that’s why Wonder Woman has traditionally been portrayed without Steve Trevor, and maybe that’s why Supergirl is portrayed alone.

Maybe that’s another reason I have always preferred Marvel.  The Invisible Woman and Jean Grey are two of the most powerful beings in that universe and they have regularly been connected with Mr. Fantastic and Cyclops, respectively.  Neither relationship has diminished their power.  They have both had children as well. 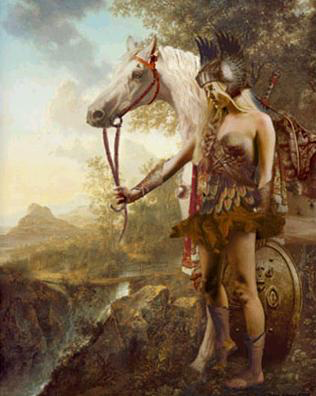 An exploration of writing and reading

Medical Tourism in India
1 SIGFRIDSSON
Creative Writing For Me

A writer, sharing advice and experiences along the way

Putting music to words, and words to pictures ~

Belatucader is a Roman-British God of War whose Altars appear exclusively in the north.

Exploring the world of ideas through books

This WordPress.com site is the bee's knees

A Celebration of Western Movies ... Pardner!

I have people to kill, lives to ruin, plagues to bring, and worlds to destroy. I am not the Angel of Death. I'm a fiction writer.

A Corner of Tenth-Century Europe

The World Pertaining to King Arthur