Grail solutions have always been about taking elements from one or more grail stories and connecting them to a better known religion.  By that argument, every successful comparison represents the correct answer.

But it can’t really.  No solution is possible without taking all of the grail stories into account, and examining ALL of their sources, Arthurian and otherwise.

Methodology is important too.  It is common in Arthurian studies to find a flaw somewhere in a source and use that as an excuse for omitting whatever is unappealing.  The more thorough and much more difficult approach is to determine where and why a source is flawed and then to work around those limitations.  What I developed here was a method of taking into account all the flaws in all the sources and not limiting my research to “grail” stories.  The result is perhaps the most complete argument on the nature of the grail and a solution that is well-evidenced.

Amazon:
Origins of Arthurian Romances: Early Sources for the Legends of Tristan, the Grail and the Abduction of the Queen

Kindle:
Origins of Arthurian Romances: Early Sources for the Legends of Tristan, the Grail and the Abduction of the Queen<img src=”http://ir-na.amazon- The standard fare when studying Arthur is to list one’s sources, reiterate what contemporary scholars have said about each of them in turn, and then take your position.  There are problems with each historical source, so if you focus on that then the period is unretrievable.  If you also note that, parallel to Arthur as an historical figure he was developing as a fantasy character, then Arthur becomes a myth.  Both are easy conclusions to come to.  Unfortunately, that means they are also simplistic.  If a person lies about their height to impress the opposite sex it doesn’t mean that they will always lie.  So it is with sources; each are complex constructs that must be carefully deconstructed before any assumptions of veracity can be made.

My thesis demonstrated that fact, and that the methodology I had developed worked.  The next step was to apply it to something else – Arthur himself.  It was telling that all the “historical” sources did not lend themselves to any positive evidence.  To be truthful, the traditional materials went from unhelpful to being evidence of a non-historical Arthur.  However the literary evidence, when properly digested, was extremely helpful.  With biases and source flaws in mind, the overall picture was a textbook example of what happens to an heroic age figure.  As one follows the materials, the figure of Arthur draws people from further and further away in both time and space.  The literature is frighteningly consistent in placing Arthur geographically and chronologically.  Arthur is only an enemy of the Anglo-Saxons in the nationalistic, “historical” works.  Elsewhere he is what every other king of his period was, a minor chieftain who raided on other local rulers for fame and silver.

Evidence of Arthur: Fixing the Legendary King in Factual Place and Time

<a href="Evidence of Arthur: Fixing the Legendary King in Factual Place and Time 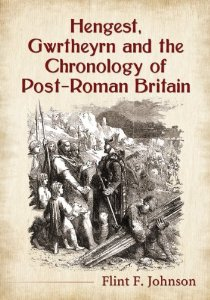 The methodology is painstaking but it allows for the use of more sources, can address more questions, and best of all provides accurate results.  The grail question has been solved using the technique, the Tristan legend unquestionably separated from the original body of Arthurian stories, and Arthur himself has been solidly placed in an historical context.

One other major question appears in the study of post-Roman Britain; what happened in the first half-century after the Roman withdrawal?  The traditional answer is that Gwrtheyrn took over and eventually hired Hengest and his brother as mercenaries.  Modern scholarship has found a plethora of ways in which to match that with the increasingly disparate archeological findings.  Even less helpful is the scant information from the continent.

But to tackle the problem, I had to drop all preconceptions and allow the sources, stripped of all the known biases and with any omissions in the forefront of my mind, to guide me.  The result is a total reinterpretation of British and Germanic political culture from 410 through the early sixth century.

Hengest, Gwrtheyrn and the Chronology of Post-Roman Britain

An exploration of writing and reading

Medical Tourism in India
1 SIGFRIDSSON
Creative Writing For Me

A writer, sharing advice and experiences along the way

Putting music to words, and words to pictures ~

Belatucader is a Roman-British God of War whose Altars appear exclusively in the north.

Exploring the world of ideas through books

This WordPress.com site is the bee's knees

A Celebration of Western Movies ... Pardner!

I have people to kill, lives to ruin, plagues to bring, and worlds to destroy. I am not the Angel of Death. I'm a fiction writer.

A Corner of Tenth-Century Europe

The World Pertaining to King Arthur